The film includes many Easter Eggs.

The Garden of Words film

There are some refers to Makoto Shinkai's previous movie, The Garden of Words:

Yukari Yukino, the female protagonist in that movie, made a cameo in your name. as Itomori High School's Japanese literature teacher.

The café that Taki and his classmates usually hang out is named "Leaves of Words", an alternative way to translate The Garden of Words to English.

The Italian restaurant that Taki worked at is named "Il giardino delle parole". This is the Italian translation of the title of the movie. Makoto Shinkai claimed that this easter egg wasn't added by him, but by one of the environment artists.[1]

Takao Akizuki, the male protagonist in that movie, made a very brief cameo near the end of the film. This easter egg was first revealed by Makoto Shinkai himself on January 3, 2018 as your name. was broadcasted on TV Asahi for the first time.

In Makoto Shinkai's novel version of The Garden of Words, there was a pair of friends named Saya and Teshigaware. It appears that Makoto Shinkai reused those names in this movie.

Yukari Yukino in your name.

Takao Akizuki in your name.

When Mitsuha met the younger Taki on the train, he was reading an English note that writes "I'm looking for my counterpart", fitting the situation. 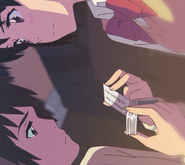 "I'm looking for my counterpart"

As Cross Road, Makoto Shinkai's animated commercial for the educational service Z-Kai, was the origin of Your Name, name of the service popped up randomly through the film.

On his journey for Mitsuha's town, Taki was looking at a map of Gifu. The presentation of attractions on the right of the map was taken from a real-life map for the anime Hyouka.

The map that Taki was looking at

In Taki's room, a cup with Makoto Shinkai's cat avatar can be seen. 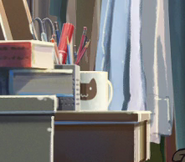