Hitoha Miyamizu (宮水 一葉, Miyamizu Hitoha) is the head of the Miyamizu family and the maternal grandmother of Mitsuha and Yotsuha. After the death of her daughter, Futaba, she began raising Mitsuha and Yotsuha herself after the girls' father, Toshiki, decided to pursue a career in politics.

Hitoha is an elderly woman with a short stature, age marks, and pair rectangular glasses. She has light brown eyes and short grey hair with bangs framing her face and mainly draping over the left side of her face. She wears her hair in a ponytail tied with a red braided cord. She is always shown wearing a kimono to emphasize her traditional views.

Hitoha is a calm and composed woman with a strong love for her family, especially her granddaughters. However, she isn't particularly fond of Toshiki since he rejected the Miyamizu shrine and its traditions to pursue a career in politics, calling him "that stupid son-in-law".

She is shown to be very traditional and takes her family's traditions very seriously, passing them down to her granddaughters. She initially objected to her daughter Futaba marrying Toshiki, an outsider; but she gave in when he agreed to marry into the family and enter priesthood.[1]

Despite being aware of the Miyamizu family's body-switching, she is noted to be "ordinary" and hard to budge, as when Taki in Mitsuha's body told her about that the Comet Tiamat was about the strike Itomori, she bluntly replied with: "nobody is going to believe that".

Hitoha was born on March 4th, 1931. Since she was born into the Miyamizu family, it is presumed that she became a shrine maiden at a young age to perform Miyamizu traditions. She was also taught about much threading cords, eventually becoming very skilled at it. At an unknown point in her life, she experienced something similar as Mitsuha's body-switching her youth, but has long forgotten the contents of her dreaming experiences.

A few years after giving birth to Yotsuha, Futaba died of an illness. Hitoha briefly grieved her daughter's death before being able to pull herself together. However, Toshiki was devastated and soon admitted that he only loved his wife and not the Miyamizu shrine. He also abandoned his priestly duties, which led to Hitoha telling him to get out of the house, so he did. He tried taking his daughters with him, but they favored living with their grandmother instead.[1] From that day on, Hitoha began raising Mitsuha and Yotsuha herself, noting that they would "always be together".

By the time of 2013, Hitoha is 82 years old. She lives together with her granddaughters in Itomori where she looks over the town and the family shrine as the matriarch. She is first seen having breakfast with Mitsuha and Yotsuha, where she remarks how Mitsuha is acting "normal" since she claims that she was acting oddly before.

She is later seen threading cords with her granddaughters, explaining the importance of their family's traditions and why they are so important to perform and remember. When Mitsuha and Yotsuha perform a public Miyamizu tradition where they make kuchikamizake, Hitoha sits and watches them while taking a minor role herself in the tradition.

One day, Taki wakes up in Mitsuha's body and accompanies Mitsuha and Yotsuha to leave the ritual alcohol kuchikamisake, made by the girls and thus becoming "half of their souls", as an offering at the Miyamizu shrine on a mountaintop outside the town. During the trip, Hitoha explains the concept of "Musubi"; time, and other concepts about time and the Miyamizu family and traditions that would later be useful to Taki. When Taki becomes confused about the comet and some old Itomori expressions, Hitoha notes that Taki is "probably dreaming right now".

Hitoha attends the autumn festival where the peak of the Comet Tiamat's brightness would be visible. However, the comet unexpectedly crashes onto Earth and destroys the town. In the process, it kills Hitoha and most of the other Itomori residents.

She is last seen with Yotsuha, Mitsuha, and their father in his Mayoral office. Subsequently, it is revealed that every resident survived the comet thanks to Mitsuha's actions. Hitoha decides to continue her life along with most of Itomori's residents by moving to Tokyo.

Taki is seen finding Hitoha's name in the records of fatalities from the Comet Tiamat disaster. Though Hitoha isn't seen in the 2016 timeline, she should be about 85 years old when the time is altered and she survives the incident.

While she survived the Comet Tiamat disaster of 2013, there has been no mention of her in the film past the incident. However, it is shown that she is still alive and well during 2021 in the manga, as she is living together with Yotsuha since Mitsuha lives alone in her own apartment. Yotsuha mentions Hitoha while talking with Mitsuha over the phone.[2] 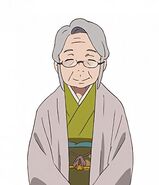