Katsuhiko Teshigawara (勅使河原 克彦, Teshigawara Katsuhiko) is a side character in Kimi no Na wa.. He is a close friend of Mitsuha and Sayaka, as well as an expert with machinery; particularly explosives.

Tessie is a young man with an average build and height. He is slightly tanned, has thick dark eyebrows and a friendly smile. Tessie sports black hair which is kept distinctively shaved, and he has hazel-colored eyes. He was often depicted in his school uniform.

After the timeskip, Tessie has grown taller, developed a more muscular build, and it appears that he has grown a small stub.

During the main story, it's pretty obvious that Tessie had a crush on Mitsuha. However, it is later shown during the alternate timeline that Taki and Mitsuha created that he and Sayaka are engaged. Tessie is not shown anywhere during the 2016 main story.

He, along with Sayaka, were the only people that helped Mitsuha with her plan to save the town people from the comet.

During the original timeline, Tessie went to Itomori High School and was friends with Mitsuha and Sayaka. He would spend most of his days with the two, complaining about how boring the place was since there was nothing to do. He is normally confused by Mitsuha’s personality but still cares about her either way.

Afterwards, he went to the festival with his friends and was stunned by Mitsuha’s sudden change in appearance. Regardless, he accepts it. It is then that the meteorite strikes and kills the population, thus ending the first timeline.

8 years after the comet, Tessie moved to Tokyo along with his friends, and presumably, his family. One evening, he and Sayaka are shown to be in a cafe which Taki also ended up in. They talk about their upcoming wedding while heckling each other, but leave before Taki can completely recognize them.

By the time of 2022, Tessie and Sayaka are looking for a new property to live in together.

Before Taki and Mitsuha get met in the famous stairs in 2022, Tessie and Sayaka are shown in an elevator looking the sun maked appeared by Hina 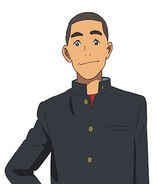 Tessie tries to catch up with Sayaka and "Mitsuha".