Miki Okudera (奥寺 ミキ, Okudera Miki), commonly referred to as "Okudera-senpai", is a side character in Kimi no Na wa.. She is one of Taki Tachibana’s colleagues who work at the Italian restaurant, and they have a mutual crush on each other for the first part of the movie.

Okudera is a very fashionable and attractive young woman with wavy mid-length maroon hair which she wears in a ponytail with two strands framing her face and amber eyes. She has a fair and light complexion and often seen wearing red lipstick. When she's not at work, she lets her hair down or has it in another hairstyle.

While working at the restaurant, she wears a waitresses' outfit that consists of a black vest, a long-sleeved dress shirt, a black bow tie, a black knee-length skirt, black transparent leggings, and black heels.

When she went out on a date with Taki Tachibana (arranged by Mitsuha Miyamizu), Okudera was shown to be wearing a black off-the-shoulder top and white 'circle-type' skirt. She also wore a white panama hat with a black bow on her head, carrying a bag on one hand and wearing a watch on the other.

In the epilogue (in the year 2021), Okudera has longer hair that she leaves untied and she is seen wearing a formal black business suit.

Okudera has a girly personality, wearing fashionable clothes and almost purposefully being attractive. When Taki Tachibana was inhabited by Mitsuha Miyamizu's spirit, Okudera seemed to think that 'Taki' was cute, and went with him to try and find Mitsuha. She reluctantly enjoys smoking, citing that she is unable to stop.

While Mitsuha (in Taki's body) is getting confused by the customers in the restaurant, Miki appears and takes care of the problem. After that, Miki's skirt seems to have a rip caused by the mean customers.

Okudera embarrassed about her slashed skirt

Okudera thanks Taki for his stitchwork.

Okudera and Taki on their date.

Okudera's clothes on the date. 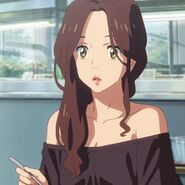