Sayaka Natori (名取 早耶香, Natori Sayaka) is a close friend of Mitsuha and Tessie. She is a gentle and quiet girl who is also a member of the broadcast club in high school. She is a side character in the Kimi no Na wa. film.

Sayaka is a teenage girl with average build and height. She has mid-length chestnut brown hair, which she wears in two braids pointing upwards and straight bangs that cover her forehead. She has light brown eyes and a mole under her left eye. After the timeskip, Sayaka cuts her hair to chin-length, which she keeps in a bobbed-hair style.

Sayaka is often depicted in her school uniform.

Sayaka is a calm and very kind girl who has a level-headed demeanor. She is also quiet and somewhat nervous, vehemently denying her attraction to Katsuhiko. She is very supportive of Mitsuha and shares her resentment of living in Itomori.

During the main story, Sayaka refuses to acknowledge her liking for Tessie, although it is later shown during the alternate timeline that Taki and Mitsuha created that he becomes her fiancé. Sayaka is not shown anywhere during the 2016 main story.

At the beginning of the story, both she and Tessie tell Mitsuha that she was acting weird yesterday. Soon after she and Mitsuha continually voice their frustration at the lack of variety in their hometown, Itomori, only to be stopped by Tessie through bringing the two to a 'cafe' - comically, it is shown to actually be just a vending machine and a bench.

She and Tessie are shown to be watching Mitsuha while she performed the 'kuchikamizake' ritual.

They are then shown as part of the first fatalities from the comet fragments that landed on Itomori.

When Taki re-switches bodies with Mitsuha, she and Tessie become the only two who was convinced to help him save the town. After Tessie blows up the electric substation of Itomori, she pretends to be the normal Itomori speaker announcer and tells the multiple districts to evacuate, but quickly got caught. She is then shown at the front entrance of the High School, helplessly trying to elicit her stunned mother's help.

8 years after the comet, Sayaka moved to Tokyo along with her friends, and presumably, her family. One evening, she and Tessie are shown to be in a cafe which Taki also ended up in. They talk about their upcoming wedding while heckling each other, but leave before Taki can completely recognize them.

By the time of 2022, Sayaka and Tessie are looking for a new property to live in together. 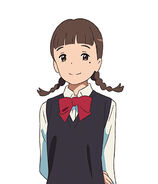 Sayaka with Mitusha riding a bike.