Taki Tachibana and his father lived together in an apartment in Shinjuku, Tokyo.

In 2013, Taki Tachibana and his father were watching the comet's live reports on TV from their living room. As the comet broke apart, he left the room and went to a rooftop nearby and watched "the stars falling".

In 2016, Mitsuha Miyamizu occasionally woke up in Taki's body in his room. It's also in this room where Taki made his Itomori drawings, which he brought along on his journey to search for the town.

It is seen that Taki continues to reside in this apartment in 2021.

The entrance of the apartment is a green door with a mailbox attached. Next to the door on the left (look from outside) is a shoe rack, with stacks of books and boxes next to and on top of it. Above the shoe rack is a wall-mounted cabinet. On the right is another cabinet, but grounded. It has an umbrella next to it. There's also a mat at the entrance. The entrance seems to lead to another section on the right, which has 2 windows as seen from outside.

The hallway which connects rooms in the apartment is L-shaped and quite narrow. It's decorated by many framed pictures and images hanging on the walls. On the left is 2 doors and a big wall cabinets, which is blocked by stacks of books. On the right is the door to the living room. At the end of the hallway is the bathroom. Turning right is a toilet at the end of the hallway, and Taki's room on the left.

The dining section has a glass sliding door leading to the balcony, which allows sunlight to shine the room in the morning. Judging the direction of the sunlight, the door and the balcony seems to face northeast. The section has a table with 2 chairs. It also has a blue cabinet with books and a telephone next to the southeast wall and a wooden cabinet next to the southwest wall. Also, there is a closet on the southeast wall.

The kitchen section hosts a refrigerator, which lies next to the entry door, but seperated by a partition. There's a short bookshelf in middle of this section, and a TV on top of it. Some other cabinets and stoves are also seen.

The room as looked from outside.

The laundry-changing room, which locates at the corner of the hallway, is where Taki-Mitsuha looked at herself in the mirror in confusion after she woke up as a boy. This is likely where family members brush their teeth. Other than the hand sink and the mirror, it also has a washing machine, which some sorts of laundry around it. In between the laundry-changing room and the hallway is a blue folding door. It's also has another transparent sliding door that lead to a balcony.

There is a bed and a drawing desk in Taki's room, which he frequently used to make his drawings. There's also a tall bookshelf in the corner of his room. His room has two windows, with one of them seems to lead to a balcony. An AC is installed in this room, but it's never seen used, as Taki prefers to use an electric fan. 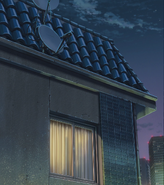 Toilet locates at the end of the hallway, next to Taki's room.

Toilet stuffs with a toilet controller and a cactus pot.

Outline of the building

As Taki's apartment is numbered 608, he's living on the 6th floor

It's implied that his floor is the topmost, therefore the building must has 6 floor. The building's roof is seen is tiled blue

At 10h16, Taki checked the note about his date, which must occur at 10h30. He arrived at the date site (Yotsuya Station) 10 minutes ealier.[1] So it took him 3 minutes at most to run from his apartment to Yotsuya Station, therefore the apartment must be 2km at most from the station 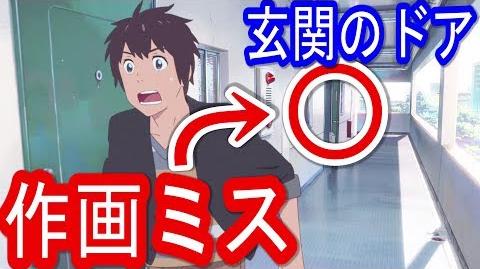