Tsukasa Fujii (藤井 司, Fujii Tsukasa) is a side character in Kimi no Na wa.. He is one of Taki Tachibana's closests friends and is often concerned about him whenever Mitsuha Miyamizu embodies him. Despite teasing Taki, he tries to support him as much as he can. At the end of the movie, he is married to Miki Okudera.

Tsukasa is a slim young man with an average build and height. He has dark blue eyes and black-blueish nape-length hair with free-falling bangs framing his face. He also sports transparent rectangular-shaped glasses. He was often depicted in his school uniform when he was a student.

As an adult, Tsukasa grows taller and develops sharper facial features. Rather than having free-falling bangs, he now slicks his bangs to the right, which gives a more professional appearance. He is also depicted in a black business suit.

He has a slightly stern yet caring personality towards his friends such as Taki and Miki; like a brother. Whenever Mitsuha embodied Taki, he would be always concerned for Taki as he suddenly acted really differently. Despite this though, Tsukasa would always support him no matter what. A good example of this would be going with Taki to find the so called “girl” he wanted to meet.

Not much is said at the end with him. However, he is now married to Miki and is a florist for a living. He graduated his high school. (with supposedly good marks) 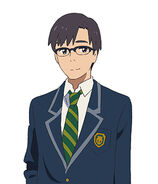 One of his jobs

Taki with Tsukasa at high school.